Emmy-winning SPAWN creator and director/producer Todd McFarlane announced the launch of a dedicated television development and production arm of McFarlane Films. Through McFarlane Films, which has a first-look television deal with wiip (MARE OF EASTTOWN), McFarlane and his President of Television, Sean Canino, identify and develop new emerging talent, creator-owned properties, independent brands, stories, and characters.

“Having been in development with Jason Blum at Blumhouse, along with attaching Jamie Foxx on a potential SPAWN movie franchise, other opportunities both in film and television came forward which led to this expansion in entertainment,” said Todd McFarlane, McFarlane Films CEO. “Films, television, and video games are all areas I intend to spend my creative energy on a steady basis.

“I’ve spent decades succeeding in other business fields, going up against some of the biggest names in those industries (Marvel, DC Comics, Hasbro, and Mattel toys) and have been able to bring to market many successful products and ideas those larger companies were not able to give to consumers. I now intend to take those same creative and business practices into Hollywood full-time.”

“As a creator first and CEO of my businesses, I pride myself on finding talented creators and inspiring ideas… then bring them to the world. Two of our newest projects, (one live-action the other stop-motion animation) have talented folks that will help get these new concepts onto the airwaves. Thomas Lennon, Anders Weidemann, Sean Lewis, our partners at wiip, and ShadowMachine are but a few of the folks we’ve begun this journey with.”

A force in the world of entertainment, McFarlane’s characters have become wildly popular and critically acclaimed in various mediums. SPAWN has won two Emmy Awards for HBO, and the character of VENOM, which McFarlane co-created, gave rise to the recent feature film of the same name, accumulating a worldwide box office total of more than $1 billion to date.

Beyond film and television, McFarlane has established himself as a multimedia maverick with the Midas touch throughout the past three decades. McFarlane co-founded Image Comics, the world’s largest independent comic book company, at which he currently serves as President.  He established McFarlane Toys, one of the world’s Top-5 action-figure manufacturers with licenses ranging from the Disney Mirrorverse to GAME OF THRONES.  And, he created SPAWN – the Guinness World Record-holder for the longest-running creator-owned comic book series.

The first is titled McFARLAND, a stop-motion, animated event series created by Thomas Lennon in partnership with ShadowMachine and wiip. The project is described as NIGHT AT THE MUSEUM meets TOY STORY in TWIN PEAKS, which will feature original McFarlane Toys. McFarlane and Lennon will executive produce the series, along with Canino and ShadowMachine.

“It is a good bet that when you combine the forces of Todd McFarlane and Tom Lennon, good things will happen…and that those things will most likely happen in stop-motion animation. We’re thrilled to be a part of the fun!,” said ShadowMachine’s Alex Bulkley.

McFarlane Films has also partnered with wiip and Epicenter (1BR, JUDAS AND THE BLACK MESSIAH) to develop the live-action drama series, “THUMBS”, based on the best-selling graphic novel written by Sean Lewis (COYOTES) with art by Hayden Sherman.  Anders Weidemann will adapt the project. The story follows 17-year-old Charlie “Thumbs” James, gamer and social outsider, who enters an esports tournament hoping to win a scholarship from tech billionaire Adrien Camus’ gamer academy so he can get his ticket out of his neighborhood.  “Thumbs” soon finds himself fighting real life and death battles in a covert war between Camus’ teenage army and a neo-fascist anti-tech movement that is about to take over the U.S.  Weidemann, McFarlane, and Canino will executive produce, along with Allard Cantor and Jarrod Murray through Epicenter, with Lewis on-board as a producer.

“It’s exciting, obviously, and a bit overwhelming as I remember buying Todd’s books at my local pharmacy store,” said Lewis. “And when someone wants to do your’s and Hayden’s comic, THUMBS, as a show, whoa! And that person is Todd McFarlane. Wait, what? I’ve been lucky enough to work with Todd on his comics, and he’s a force of nature. He tends to will things into existence. From day one, it’s just been forward momentum for this project.”

Weidemann added: “The storyteller, father, and gamer within me all fell quickly and madly in love with Sean Lewis’ and Hayden Sherman’s graphic novel THUMBS, a vividly imaginative, fun-packed and disturbing ride into the not-too-distant future. It’s a heart-pumping tale about gaming, the metaverse, and the entire fate of human existence. Simply put, it’s one of those stories I’d wish I was able to watch with my 12-year-old son. Hey wait: I will.”

“We were looking for a way to bring Sean Lewis’s timely graphic novel to life, and we thought entrusting comics legend Todd McFarlane to lead the charge would be a great start,” said Cantor and Murray. “We also couldn’t ask for better studio partners than ours at wiip, who are some of the smartest and most supportive creative minds in town. So, we turned to accomplished premium series creator, Anders Weidemann, to develop a serialized narrative that will captivate audiences everywhere.”

Last June, McFarlane Films announced it is developing SAM & TWITCH into a live-action TV series.Inspired by the iconic characters from McFarlane’s Spawn comic, the premium drama series follows detectives Sam Burke and Max “Twitch” Williams as they fight the evils of a near-future New York City. SAM & TWITCH is being adapted by executive producers Jason Smilovic and Todd Katzberg for McFarlane Films and wiip.

“The rare combination of artistic genius and trailblazing entrepreneurship that defines Todd’s career over the last thirty years is a true marvel,” said wiip’s Mark Roybal.  “He is a world-class, award-winning storyteller, a mogul in multiple industries, and above all, a devoted family man. wiip’s strategic partnership in television with McFarlane Films, led by Sean Canino, allows us to tap into a pipeline of global IP and collaborate with emerging voices in the comic book world which will bring audiences into new universes infused with Todd’s wonderfully twisted vision of the world.” 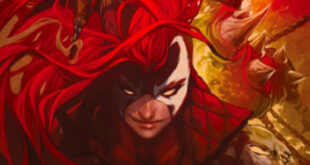 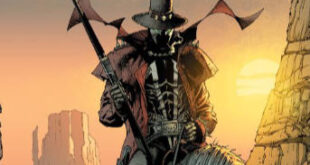