Take A Bite Out Of Army Of Darkness

Devour your fill of Army of Darkness in the first ever Army of Darkness Omnibus. S-Mart worker, horror hero and professional zombie killer Ash Williams is back in over 450 pages of Dynamite’s Army of Darkness written by Andy (Danger Girl) Hartnell, James (Freddy vs. Ash vs. Jason) Kuhoric, Robert (The Walking Dead) Kirkman and many more.

Follow Ash through the first 18 issues of the acclaimed series with story arcs “Ashes to Ashes”, picking up at the end of the original Sam Raimi and Ivan Raimi film where Ash must insure his past self’s destiny; The Necronomicon has it in for Ash’s old boss and customers – and only Ash can rally them in “Shop till You Drop (Dead)”; Ash gets thrown in the loony bin of Arkham Asylum and crosses over with H.P. Lovecraft’s “Herbert West – Reanimator” for a throw-down of mythic proportions in “Army of Darkness vs. Re-Animator”; and Ash’s attempt to destroy the source of the Deadite plague once and for all in “Old School”.

Also included are short stories presented in the popular spin-off series “Tales of the Army of Darkness” and a complete cover gallery. 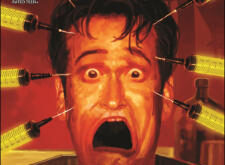 Army of Darkness vs Reanimator: The Rematch 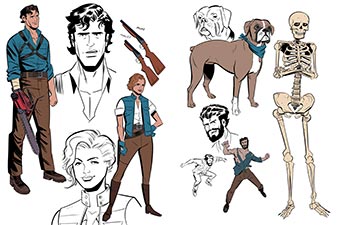 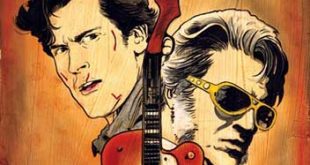