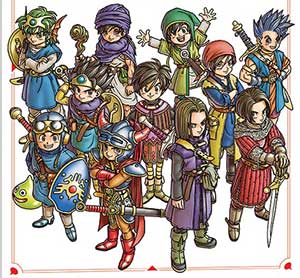 “DRAGON QUEST ILLUSTRATIONS: 30th ANNIVERSARY EDITION celebrates Akira Toriyama’s lasting contributions to one of the most popular video game franchises of all time,” says David Brothers, Editor. “Dragon Quest has helped to shape the continued evolution of the RPG genre and Toriyama’s designs—created concurrently with his work on some of the best manga in the world—have always been a focal point of this celebrated series.”

Internationally renowned for his playful, innovative storytelling and humorous, distinctive art style, Akira Toriyama burst onto the manga scene in 1980 with the wildly popular series, DR. SLUMP. His hit series DRAGON BALL (published in the U.S. as DRAGON BALL and DRAGON BALL Z) ran from 1984 to 1995 in Shueisha’s Weekly Shonen Jump magazine. He is also known for his design work on video games such as Dragon Quest, Chrono Trigger, Tobal No. 1, and Blue Dragon. His acclaimed manga works include COWA!, Kajika, SAND LAND, Neko Majin, and a children’s book, Toccio the Angel. VIZ Media is the official North American publisher of a wide array of Akira Toriyama titles, including DRAGON BALL, DRAGON BALL Z and DRAGON BALL SUPER, as well as DR. SLUMP, SAND LAND and COWA!.

Dragon Quest is a classic video game property developed by Square Enix that originally debuted in Japan in 1986 and influenced scores of RPG titles that followed. The Dragon Quest video game franchise spans 30 years and over 30 individual game releases. Many of these titles are available in English. The newest game, Dragon Quest XI was released in Japan for the Nintendo 3DS and PlayStation 4 in July 2017, and worldwide for the PlayStation 4 and Microsoft Windows in September 2018.