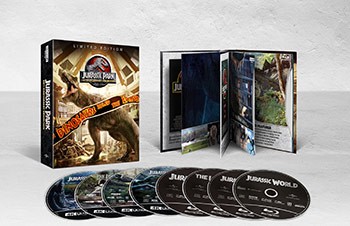 One of the most groundbreaking franchises of all time celebrates its 25th anniversary with a brand new commemorative set when Jurassic Park 25thAnniversary Collection arrives on May 22, 2018 from Universal Pictures Home Entertainment. Based on the best-selling book by Michael Crichton, the epic blockbuster and winner of three Academy Awards, including Best Visual Effects, Best Sound Editing and Best Sound Mixing, Jurassic Park continues to be one of the highest-grossing franchises of all time, grossing over $3 billion worldwide. Available for the first time ever in 4K Ultra HD featuring newly remastered versions of the films, the collection also includes Blu-ray and Digital via the all-new MOVIES ANYWHERE app.  This special anniversary collection features premium book-style packaging and is packed with hours of bonus content including deleted scenes, storyboards, revealing interviews and behind-the-scenes featurettes that make this a must own film for everyone’s library.  Jurassic Park 25th Anniversary Collectionretains all the excitement, suspense and wonder that made it an instant worldwide classic that continues to captivate audiences worldwide.


Jurassic Park 25th Anniversary Collection will be available on 4K Ultra HD in a combo pack which includes 4K Ultra HD Blu-ray, Blu-ray and Digital. The 4K Ultra HD disc will include the same bonus features as the Blu-ray version, all in stunning 4K resolution.