Barely one week into the new year and everyone is already looking for bright spots in the coming months.  That’s a lot of pressure to put on a new year, but don’t worry, comic book publisher American Mythology is here to help by bringing a Saturday morning cartoon favorite – The Robonic Stooges – to a comic book shop near you this April!  The Three Stooges have been bringing the funny to fans through the comic publisher for the last five years, so the company decided to give The Boys an upgrade before the 100 years of Stooges kick off in 2022!

If you remember Saturday morning cartoons, you remember the Robonic Stooges, which originally aired as its own series in 1977 -78.  The series featured Moe, Larry, and Curly as robonically-altered bumbling superheroes who operated from their very own junk yard headquarters under the direction of Agent 000 (pronounced Oh-Oh-Oh), who ran the Super Hero Employment Agency!  The series was developed by Norman Maurer, Moe Howard’s son-in-law and the creative force behind The Three Stooges comics of the 60s and 70s.  The standalone series ran for 16 episodes, and American Mythology Comics decided, well, that just wasn’t enough robo-stoogeness!

The comic will launch in April with a special parody story – The Imbecile Gauntlet by Three Stooges’ long-time scribe, S.A. Check.  The story pits The Robonic Stooges against the inter-galactic threat known as Oreganose!  The second story for the issue, Fright at the Museum, was written by Jordan Gershowitz (Laurel & Hardy, Oggy & The Cockroaches).  Interior art for the issue is provided by fan-favorite Jorge Pacheco (The Three Stooges and Laurel & Hardy) and new-to-the-series artist, Philip Murphy (Rick & Morty, My Little Pony).  Cover art for the book is by Eisner award winning artist, Eric Shanower, and Jorge Pacheco.  This issue marks the first time the Robonic Stooges will venture onto the pages of comics and the publishers promises an all-ages treat for fans new and old alike.

“What can be better than giving The Three Stooges their own wacky super powers?” asked book writer S.A. Check.  “This takes the Stooges smacks, whacks, slaps, and eye-pokes to a whole new level of fun! The classic cartoons were crazy, irreverent, and always entertaining, and we just wanted to try to capture that same energy with the new comic.  As always, AM really wants to get the book just right for fans of The Stooges and Robo-Stooges alike!  So, we tried to make sure the things we loved most about the Robonic Stooges were present, the powers, the costumes, the junk yard, Agent 000!  We also wanted to give new readers a window to join in on the fun, so we came up with a story we felt everyone could relate to with The Imbecile Gauntlet.  You don’t need to be an existing fan of The Stooges or even the Robonic Stooges to enjoy the story and have a few laughs.”

“The Robonic Stooges are everything right with comic books,” said Barlow Jones, marketing manager for American Mythology.  “They’re a crazy, wacky, blast from Saturday mornings past to help remind us to add a little fun into our days, and we could all use some of that right now.  Just by bringing the Robonic Stooges back to life in comics, we’re showing what die-hard fans of The Three Stooges we are here at AM.  There’s no part of these comedy legends’ history we aren’t in love with, and this is just one more way for us to give something special back to the Stooge fan in all of us.  The Robonic Stooges takes the same fun the Stooges injected into their shorts and movies and gives it all a fun robonic twist.  Just give the book a try!  We always strive to give fans more nyuk for their buck!”

The Robonic Stooges is slated for release in April of 2021.

Previous A New Dark Knight Rises: John Ridley Introduces Us to The Next Batman
Next House of El’s Claudia Gray Brings the Streets of Krypton to Life 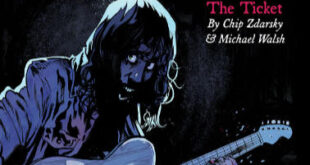 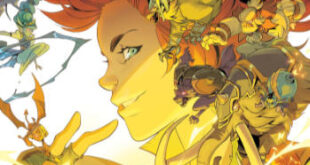 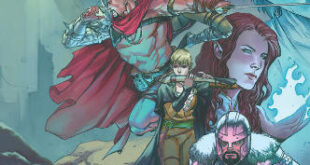