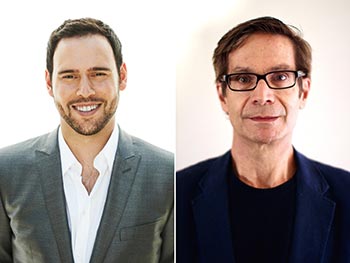 Scooter Braun, founder of SB Projects, and David Maisel, Founding Chairman of Marvel Studios, announce a new entertainment joint venture, Mythos Studios. To launch the new venture Mythos Studios has acquired a 50% stake in Aspen Comics, as well as the entertainment rights for the comic book company’s intellectual property, including the iconic artwork, characters, and worlds created by its late founder, Michael Turner.

Mythos Studios currently has multiple projects in active development, including two based on Aspen Comics. The first is inspired by the top selling comic book of 1998, Michael Turner’s “Fathom,” which follows super-heroine, Aspen Matthews, a marine biologist who embarks on a journey of self-discovery, above and below sea level, after finding out she has a mysterious background.  The second project in development, inspired by one of the top selling independent comic books of 2003, “Soulfire,” is centered around a time in the future with amazing, advanced technology but one where all magic has been lost. The story follows a boy named Malikai, the chosen one, and a team of supernatural characters on a quest to bring magic back to the world and defeat the forces of evil.

“David’s experience of building some of the greatest franchises in film history during his tenure as Founding Chairman at Marvel Studios is invaluable and I’m excited to be partnering with him on this new venture,” said Mythos Studios co-founder Scooter Braun. “We have some incredible projects in the works and I’m excited to help bring David’s brilliant vision for these properties to the world.”

“Scooter is already a legend as a pop culture engineer and master marketer to global audiences. I can think of no more perfect partner to bring the next generation of franchise entertainment to the world,” said Mythos Studios co-founder David Maisel. “He is also a longtime personal friend, and we are already having a blast working together in bringing these amazing properties to life. Our combined experiences across film, TV, music, and Broadway make our playing field for future projects so exciting.”

Braun is the founder of SB Projects, a diversified entertainment and media company with ventures at the intersection of music, film, technology, brands, culture, and social good.  In addition to managing a roster of some of the biggest names in entertainment, including Justin Bieber, Kanye West, and Ariana Grande, Braun and his team have grown their film and television division to include a robust slate of projects including CBS procedural “Scorpion,” “The Giver,” and “Never Say Never,” which remains one of the highest grossing music documentaries in domestic box-office history.

Maisel served in various capacities at Marvel from 2003-2010, including President, Vice Chairman, and Chairman of Marvel Studios, and Office of the CEO of Marvel Entertainment.  Maisel is credited as the architect of the current Marvel Studios that finances and produces its own films and was given the title of Founding Chairman of Marvel Studios by Marvel and Disney in 2014.  Maisel has executive produced such films as “Iron Man,” “The Incredible Hulk,” “Iron Man 2,” “Thor,” and “Captain America: The First Avenger.” Maisel was instrumental in integrating Marvel’s main characters into one universe and spearheaded the sale of Marvel to The Walt Disney Company in 2010.  Most recently, Maisel executive produced the animated film “The Angry Birds Movie,” which was financed and produced by the brand’s owner Rovio Entertainment.  The film was one of the top-twenty films of 2016, and its distribution partner Sony’s top-grossing film worldwide.  Before working at Marvel, Maisel had senior executive positions at Creative Artists Agency, The Walt Disney Company, and Endeavor Talent Agency.  Maisel is also a Tony-Award winning producer of the hit Broadway show “Fosse.”

Mythos Studios will be based out of Los Angeles and helmed by Braun and Maisel with longtime SB Projects COO Scott Manson, who will be joined by a team of production and creative executives. Catherine Winder, the acclaimed animation producer, will be re-teaming with Maisel after their success together on “The Angry Birds Movie.”

The “Fathom” and “Soulfire” projects are in active development and the venture is exploring distribution and production financing partners. Future projects in the pipeline include live action and animation both from original and acquired IP.