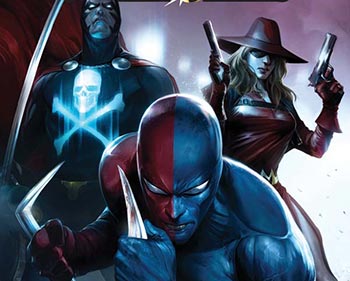 It all begins again. After the heroes of Project: Superpowers were transported from the 1940s to the present, they now have to adapt to a brave new world. Issue #1 showcases the characters getting used to living in the present and introduces Imani Cooper, an 18-year old girl who finds herself as an integral part of the new age of heroes.

When a sudden attack knocks out power worldwide, the heroes are rushed into action to catch falling planes. The Green Lama uses his mystic abilities to keep the flights aloft, but the task is too great for him forcing the others to rescue the passengers before they fall to the ground. The Lama further struggles when he is attacked by fellow project member Devil. What has taken control of the Devil and what has caused the power drain is still unknown.

Writer Rob Williams does an amazing job introducing the various heroes, which is not an easy task considering the number of characters. Sergio Davila’s artwork is stunning and is augments by Felideus’ colors and Simon Bowland’s letters.

For those unfamiliar with the characters of Project: Superheroes, the issue introduces you to them by name and tells you what their powers are. The Devil, Black Terror, Green Lama and others are not new characters crated for the series. They were originally published during World War II and have been revived by Dynamite in this series.

The issue serves as an excellent launchpad for the new adventures of Project: Superpowers. You don’t need to know anything about the heroes to enjoy the issue, but for those who want more background, check out the Project: Superpowers Trade Paperback.