Project: Superpowers Comes To A Conclusion

The events of the last two Project Superpowers series come to a thunderous conclusion! Heroes will be revealed, villains will stand united and nothing will ever be the same again! This issue is such a momentous closing to the second chapter that it takes two Alex Ross painted covers to contain it all! Plus, the painted origin of Dynamic Man by Ross, Krueger and Klauba!

Project Superpowers is a comic book first published by Dynamite Entertainment beginning January 2008. It is co-plotted by Jim Krueger and Alex Ross, with scripts by Jim Krueger, covers by Alex Ross, and interior art for #0 by Doug Klauba and Stephen Sadowski, and Carlos Paul for the remainder of the series. Alex Ross is also art director, which includes sketched pages, color guides, and redesigns of most of the characters.  The series resurrects a number of Golden Age superheroes such as The Black Terror, The Death-Defying ‘Devil, and Pyro Man! More of the world’s greatest heroes thrill fans new and old month after month in Project Superpowers! But no more! Now everything changes!  Make sure to pick up the last issue of Project Superpowers Chapter 2 this June.

Previous Bill Condon To Direct The Twilight Saga: Breaking Dawn
Next Dynamite Explores The World Of The Green Hornet 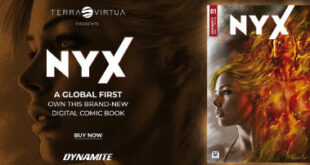 Pantha Claws Her Way Into Solo Series This January