National Geographic announced that the second season of its acclaimed scripted anthology series GENIUS will chronicle the life and work of Spanish painter Pablo Picasso, one of the 20th century’s most influential and celebrated artists. The new season, from Fox 21 Television Studios, will again be executive produced by Brian Grazer and Ron Howard’s Imagine Entertainment, Madison Wells Media’s OddLot Entertainment and EUE/Sokolow, and will premiere in 2018. The first season of GENIUS, which concluded last night, was watched by more than 45 million people around the world, and is National Geographic’s best performing new series launch ever.

The artistic career of Pablo Diego Jose Francisco de Paula Juan Nepomuceno Maria de los Remedios Cipriano de la Santisima Trinidad Ruiz y Picasso spanned more than 80 of his 91 years, much of it in his second home of France. Much like the subject of the first season of GENIUS, Albert Einstein, Picasso imagined and interpreted the world in totally new and unorthodox ways, and constantly reinvented our perceptions of art and creativity. The prolific artist generated more than 50,000 works, among the most notable being The Old Guitarist from his Blue Period, now on display at the Art Institute of Chicago; Guernica, inspired by the Nazi bombing of a small Spanish town of the same name, currently on display at the Museo Reina Sofia in Madrid, Spain; and Les Demoiselles D’Avignon, inspired by lover and muse Fernande Olivier, now on display at the Museum of Modern Art in New York City.

His passionate nature and relentless creative drive were inextricably linked to his personal life, which included tumultuous marriages, numerous affairs and constantly shifting political and personal alliances. He lived most of his life in the vibrant Paris of the first half of the 20th Century and crossed paths with writers and artists including Ernest Hemingway, Coco Chanel, Henri Matisse, Marc Chagall, Gertrude Stein, Georges Braque, and Jean Cocteau. Picasso constantly reinvented himself, always striving to innovate and push the boundaries of artistic expression.

Showrunner, executive producer and writer Ken Biller will continue his role overseeing the new season. The second season will also once again hail from From Fox 21 Television Studios, whose recent “The People v. O.J. Simpson: American Crime Story” dominated every awards contest and critics’ list; Imagine Television, the producer of “24” and “Empire” with executive producers Brian Grazer and Ron Howard along with executive producer Francie Calfo and producer Anna Culp; and Madison Wells Media’s OddLot Entertainment, which earlier this year produced the Academy Award®– nominated film “Hell or High Water,” with executive producers Gigi Pritzker and Rachel Shane. Sam Sokolow and Jeff Cooney from EUE/Sokolow are also executive producers. Filming is expected to begin later this summer for a 2018 premiere on National Geograhic Channels in 171 countries and 45 languages.

“We are thrilled with the enthusiastic response audiences and critics have had for GENIUS over the last nine weeks, and are excited to be delving back in to the concept with season two,” said CEO of National Geographic Global Networks Courteney Monroe. “More so than any of his contemporaries, Picasso’s work dramatically expressed the modern age and defined new cultural norms. We are excited to explore his life and his genius with the incredibly talented team behind the series.”

“The remarkable story of artistic visionary Pablo Picasso is the perfect subject for season two of GENIUS” said executive producer Ron Howard. “Picasso was a trailblazer who left a profound artistic and cultural impact on the world and we look forward to continuing our successful partnership with National Geographic and Fox 21 Television Studios in telling the untold story behind the brilliant individual.”

“Season one has been a fantastic experience for all of us, and we owe a big debt to Courteney, Carolyn and the Nat Geo team for being such great partners,” commented Bert Salke, president of Fox 21 Television Studios. “Picasso is arguably one of the most influential artists of the last century with a life story almost too fantastic to be reality. It’s the perfect next chapter for Ron, Brian, Ken and this franchise.”

Hailed as “Joyful to watch” by the Los Angeles Times, “Compelling” by The New York Times, and featuring “Superb performances” according to the San Francisco Chronicle, the first season of GENIUS starred Geoffrey Rush as professor Albert Einstein, Johnny Flynn as Einstein in his youth, and Emily Watson as Albert’s second wife – and first cousin – Elsa Einstein. Over 10 episodes, the series explored how Albert became Einstein, including his rise from humble origins as an imaginative, rebellious thinker, through his struggles to be recognized by the establishment, to his global celebrity status as the man who unlocked the mysteries of the cosmos with his theory of relativity. 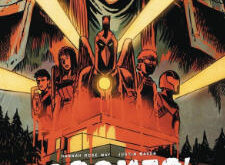