Kick-Ass Debuts at Number One on DVD Charts

Just like its title character, the DVD, Blu-ray and digital download debut of Kick-Ass did not need any superpowers to take down the competition on the weekly charts as it proved dominant across all revenue channels this past week. Released by Lionsgate, Kick-Ass has debuted number one on the DVD sales chart. The Blu-ray combo pack of the film (three discs- including Blu-ray, DVD and digital copy), also debuted at number one. In addition, the release came out of its first weekend as the top movie download on the iTunes store, Zune and Sony/Playstation and achieved the biggest digital week performance ever by a Lionsgate title.

Kick-Ass, which grossed nearly $50 million domestically and $100 million worldwide during its theatrical run, also achieved the highest box office-to-DVD conversion rate for all major DVD releases this quarter, helping Lionsgate to maintain their industry leadership in box office-to-DVD conversion. Lionsgate also had the top two converting titles last quarter for films over $10 million box office with From Paris With Love and Daybreakers.

“Kick-Ass is truly one of the most unique, entertaining, and action-packed movies of the year,” said Ron Schwartz, Lionsgate General Manager and Executive Vice President. “With its strong word-of-mouth, we felt confident that it would have a powerful home entertainment debut and are particularly pleased with the success of the Blu-ray combo pack, which accounted for 42% of week one sell-through revenue.”

Co-written and directed by Matthew Vaughn (upcoming X-Men: First Class), the ass-kicking adventure about unlikely real-life crime fighters stars Aaron Johnson (Nowhere Boy), Christopher Mintz-Plasse (Superbad) and Mark Strong (Robin Hood, Sherlock Holmes), along with the dynamic father-daughter duo played by Chloe Grace Moretz (upcoming Let Me In), and Nicolas Cage (National Treasure series). Based on the comic written by Mark Millar and John S. Romita Jr., the story follows Dave Lizewski (Johnson), an ordinary teenager who goes unnoticed in high school until he dons a mask to become “Kick-Ass,” a real-life crime fighter. Bruised and beaten and without any real super powers, he is saved by a father-daughter duo (Cage as “Big Daddy,” Moretz as “Hit-Girl”) who have been fighting their own battle against a vicious crime-lord. After a firestorm of Internet publicity, Kick-Ass becomes the target of the same crime lord, which leads to the ass-kicking finale when the three crime fighters take on the crime lord, his son Red Mist (Mintz-Plasse) and his gang of criminals. 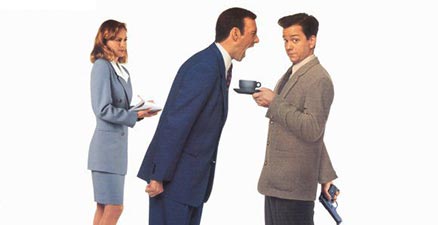