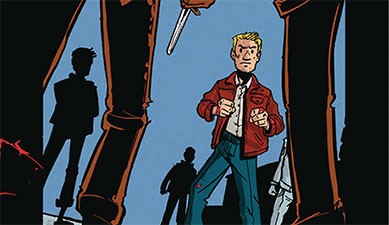 If Sin City and Tintin hooked up it’s hard to imagine the resulting offspring being anything other than OFFBEATS, a kinetic crime noir set in the jazz-drenched atmosphere of 1950’s New York City. Guardian Knight Studios today announced OFFBEATS #1 kicking off this four-issue limited series.

Created by Tom Sacchi and John Ward, OFFBEATS is the tale of Jim, a lowly mechanic who flees to the Big Apple in search of a new life as a writer but instead finds himself caught between a hard-nosed police force and the mob. Jim must team up with small-time hustler Booker to save Booker’s sister from the mob, and stay one step ahead of the police.

This unusual juxtaposition of tone was very much a deliberate choice as co-creator Tom Sacchi explains, “I’ve had a love affair with the Belgian comic scene since I was a teenager. I just love how the Belgian creators can use cartoony characters in very real settings, coupled with real life situations. I really dig this contrast.”

“I love dark, moody tales set in this era, but I felt this was a well-trodden landscape, “said co- creator and writer John Ward. “The challenge was to create something that hit all the familiar story beats but somehow felt fresh, and I think the cartoon style really works in this instance.”

Without doubt one of the most distinctive aspects of the book is the gorgeous European style artwork, courtesy of talented Australian artist Giles Crawford. “I try to only work on projects I enjoy in some way,” Giles explains. “… and jazz, gangsters and 1950’s cities are all things I like to draw. It’s a fast paced, fun story.”

Tom Sacchi describes the book as a “love letter to mid-century Americana and NYC,” adding “I’m a born and raised “New Yorker” and wish I had a time machine so I could go back in time to this fabulous era.”