“This game will bring fans even closer to the fun of HEXBUG’s playful, adventurous robotic creatures,” said Bob Mimlitch, III co-founder and chief technology officer of Innovation First International. “The new platform is a fun, free complement to our existing robotic toys, allowing users to easily take their HEXBUGs on the go, while leaving their tracks and physical bugs at home. The game is also totally addictive.”

At the start of each mission, players choose their own Nano V2 before exploring their way through endless horizontal tracks and vertical tubes filled with collectibles, power-ups, obstacles, and… enemy HEXBUGs! Players will need to travel fast and far to unlock new track pieces, complete missions, and confront electrifying surprises around each and every turn.

In addition to traversing the auto-generated race track, the fast-paced gaming experience includes a number of fun features, such as: 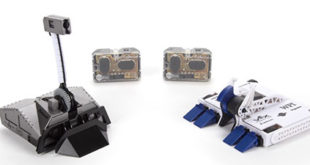 Call of Duty: Heroes Available on Mobile and Tablet