The captain of the Royal Guard has fled the capital city with the Queen of Maar, suffering under the effects of an evil spell. Captain Rook’s only hope of returning Queen Olwyn to her throne and saving the kingdom from impending war lies on an island half a world away—a place known in myth as Isola, land of the dead.

“Karl and I have been friends since we were 10 years old,” said Fletcher. “Publishing ISOLA with Image Comics is the culmination of everything we dreamed about as kids and worked toward as adults.”

“ISOLA is my dream comic,” said Kerschl. “Exotic animals, sprawling forests, mythic creatures: all of my artistic indulgences under one roof.”

Previous Task Force X Embarks On A New Mission In ‘Suicide Squad: Hell To Pay’
Next ‘Jumanji: Welcome To The Jungle’ Stays Top Of The Heap 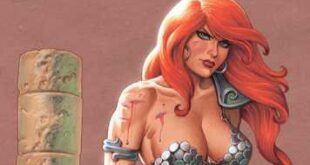