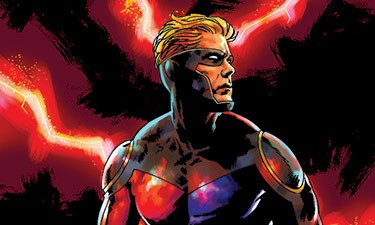 Peter Cannon, the orphaned son of an American medical team, was raised in a Himalayan lamasery, where his parents had sacrificed their lives combating the dreaded Black Plague! After attaining the highest degree of mental and physical perfection, he was entrusted with the knowledge of the ancient scrolls that bore the secret writings of past generations of wise men. Peter Cannon: Thunderbolt debuted in January of 1966 through Charlton Comics. In 2012, Dynamite Entertainment resurrected the character in a self-titled series written by Steve Darnall and Alex Ross, drawn by superstar artist Jonathan Lau.

“I’ve been away from the genre for a few years. This is me refreshed, grinning and more than a little bit angry. I want to try things. I want to have fun. Hell, we’ve created a whole new supporting cast of heroes for this series because we wanted to. I wanted to do a state of the art, state of the superheroic nation, and Peter Cannon: Thunderbolt is it,” remarked author Kieron Gillen. “High adventure, big ideals, epic destruction, heroism, despair, and nine-panel grids.”

“We’ve been working on this with Kieron for a good long while and he’s really leaning into the character and concepts that put him in mind to write the series for us,” said Joseph Rybandt, Editorial Director for Dynamite Entertainment. “And we’re letting him have free reign to work his particular talents on this book and it’s going to be one of our most talked-about series in 2019.”

Kieron Gillen’s experience as both a comics writer and journalist makes him a standout choice for the legacy character.  Gillen’s first graphic novel, Phonogram (with artist/co-creator Jamie McKelvie), was published through Image Comics in 2006, the same year as Dynamite’s founding.  Gillen’s work on Marvel’s The Uncanny X-Men, Thor, and Young Avengers garnered his mainstream success, but his ongoing gods-as-popstar series with longtime collaborators Jamie McKelvie and Matt Wilson The Wicked + The Divinelaunched to both critical and commercial success.

“There’s a fascinating duality to Peter Cannon, and I’ve noticed that Kieron has a duality of his own, which really comes across in the writing of this book. There’s more going on here than just what’s happening on the page, and I’m very excited to see peoples’ response to the book,​” stated senior editor Matt Idelson.

Speaking about series artist Caspar Wijngaard, Gillen noted, “He’s a strikingly ambitious, notably smart artist, with a writer’s creative brain. The word “collaboration” is key. I have written this in an ornate and structured clockwork style, but knowing Caspar would be drawing it, also left room for lots of collaboration and additive ideas.”

“Kieron is, in my opinion, one of the smartest writers in the industry today.  Who else to write the series of The World’s Smartest Man! His pitch was simply fantastic, he’s really done his research.  Peter Cannon comes from the silver age of comics, the age of the heroic pantheon, and he’s one of my all-time favorite characters,” said Nick Barrucci, CEO and Publisher of Dynamite Entertainment. “We are giving Peter Cannon: Thunderbolt the respect he deserves by bringing aboard the most dynamic creative team possible, with Kieron leading the charge.”

Peter Cannon: Thunderbolt #1 is slated for release in January 2019.